History of The Royal School Cavan

From Past to Present

Cavan can boast the appointment of the first Royal School Master, John Robinson, who probably held classes in the confiscated abbey of St Mary’s, the ruins of which can still be seen besides GQ’s snooker hall, so favoured by modern day students. The next recorded appointment, found in the Patent Rolls of King James I, was John Stern, who held office from 1622-24. His successor was Nicholas Higginson, who was perhaps a graduate of Christ Church Oxford. During his Headmastership an important grant of lands, comprising those of Tirchonry, Tullymongan, Drumcrawe and Billis, was made to the School by King Charles I. More lands were subsequently added, to give a total of some seven hundred and thirty-six acres.

The Rising of 1641 saw the mass expulsion of Protestants from Cavan. Andrew Cloghie, who was minister in the town at the time, describes the scene as one of ‘nothing but destruction and desolation’. In the subsequent period of war, famine and disease it is unlikely that the School was able to function; nor is it probable that it received any encouragement from the antiroyalist and anti-episcopalian regime of the Cromwellian. Little wonder therefore that the next appointment of which we have any record comes at the Restoration, with John Newcommen, nominated by letters patent dated February 22 1661. 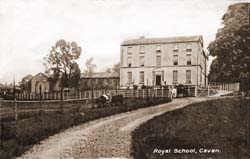 After that, for the next seventy- four years, the history of the School remains obscure. There is a brief, rather unflattering mention in James Margetson’s Publique Schooles of Ulsterin 1673; in 1700 a letter to Margetson’s successor as Archbishop of Armagh, Michael Boyle shows that the Headmaster then was a man called William Brody, possibly a graduate of King’s College, Aberdeen

Apart from this there is silence until the appointment in 1735 of Dr Thomas Sheridan. Sheridan without doubt ranks as the School’s most famous Head. Certainly he is the only one who has so far made it to the Oxford Dictionary of National Biography, although his main claim to fame rests chiefly on his friendship with Jonathan Swift.

Sheridan spent three years at Cavan Royal, and hated it. He fell out with a number of his neighbours; but his main complaint was what he described as the ‘moist and unwholesome’ air, which badly affected his asthma. As a remedy he took a daily half-pint dose of whisky, combined with ‘an agreable mixture of garlic, bitter orange, gentian-root, snake-root, etc.’ The concoction also no doubt helped anesthetise him against his failure to find a more congenial appointment; among the positions he applied for were the deanery of Kilmore and the headmastership of Armagh Royal.

In 1738 Sheridan sold the Headmastership for the then considerable sum of £400. The transaction marks the start of a period during which the office was simply trafficked for money, with little interest being paid to education. One incumbent even took the income of the School while running his own lucrative establishment in Donnybrook.Little wonder therefore that in his Schools and Scholars of Breiffne Philip O’Connell speaks of ‘the history of the School in the eighteenth century as a disreputable story of neglect and decay’ The nineteenth century saw an attempt at reform carried out by the Board of Education – the so-called ‘Clare Street Board’ – which was set up in 1813 to regulate the endowed schools of Ireland. One of the Board’s first acts was to give the School a permanent home; since 1611 it had led a somewhat peripatetic existence, even, at one stage, being located in Cootehill!

The present building at Lurganboy was completed in 1819. The plans were drawn up by Francis Johnson, and executed by John McMahon, under the direction of John Bowden. The Board was delighted with the result, confidently asserting that the School was now set to become one of the most flourishing in Ireland.

In 1833 we find it making a somewhat different assertion: ‘The RoyalSchool at Cavan is the least effective of all the Royal Schools.’ The Board blamed the advanced age of the Headmaster, John Moore, who was over eighty at the time and had been in position since 1806. Moore promptly resigned – in favour of his son, William Prior Moore, who after a period of some initial success, let the School slide once more. The Board proposed encouraging him to do better by making his salary dependent on the number of pupils he was able to attract. In the end this proposal was not put into practise; instead Moore’s salary was slashed by a third.

By 1886 things had got so bad that it was being suggested the School should close. The idea was strongly condemned by the local Protestant population, who argued that such a move would constitute a ‘serious and lasting injury’ to their interests. Nonetheless, even they had to concede that changes were needed to make the School ‘popular and successful’.

Despite all the criticisms levelled against him Moore continued to cling to office until 1891, only resigning then because he had secured for himself an extremely profitable pension.. He died in 1901 a man of immense wealth, the owner of some seventy properties, including fifty acres in Billis and twenty-one in Cavan.

With Moore’s departure the School came under a new type of management, that of the Protestant Board of Education. Amongst the Board’s powers was that of appointing the Headmaster, and their first nominee was James Hampton. A picture of the School in his time is provided by a report made in 1910 by the Intermediate Education Board. It shows a student body of some twenty-three dayboys and seven boarders, with two masters, besides Hampton himself. There was also Miss Reid, who came in to teach drawing, and two sergeants, Guy andDenton who taught drill and ‘musketry’.

Hampton left the School in 1913. He was followed, in fairly swift succession, by Mayers and Charles Bain. Then, in 1924, John Anderson arrived, the man who was, at long last, to make the School a success.

When Douglas Anderson arrived at the Royal the first thing to meet him was a calf placidly grazing at the front door; it had simply wandered into the School grounds. But worse than a stray calf was soon to be discovered. The fabric of the building, the finances, the pupil numbers were quickly found to be in a parlous state and Anderson began to feel that he had been appointed under false pretences. Indeed, according to his son Douglas there were times in those early days when he felt like resigning. Nonetheless he persevered, and under his management the School began to flourish and prosper. Numbers went up, in part due to the full admission of girls. There had, in fact, been female day pupils at the School since 1915, but now they were allowed to board, making Cavan Royal only the second fully co-educational school in the state. (The first was Wesley College, Dublin.) Roman Catholics were also welcomed (although, in fact, there had been the occasional Roman Catholic pupil since at least the eighteenth century.) The first was a girl called Bride McNamara, whose recollections of her time at the School are wholly positive. ‘I’d do it all again,’ she says, despite the fact that one of her abiding memories was dissecting frogs in Science class.

Anderson also undertook an extensive programme of building and refurbishment. This did not, however, extend to the roof, whose dilapidated state continued to defy the School’s meagre finances until 1998, when it was blown away in a storm and the replacement was provided by the insurance company. Electricity was also installed, although central heating did not come until much later, and up until then the School continued to be warmed by open fires. During ‘the Emergency’ the School used more electricity than it was entitled to, and to prevent the supply being cut off Anderson introduced ‘double Summer time’ with pupils rising at six in the morning and classes finishing at three.

John Anderson remained headmaster until his retirement in 1970, but even after this he continued to live in the School and act as manager, until his death in 1982. His successor as headmaster was his own son, Douglas, who had first arrived at the Royal as an infant of six months. As a child he seems to have regarded the whole place as a kind of adventure playground, climbing up trees and chasing chickens along the drains – images which will no doubt amuse those who knew him only in later life.

Like his father, he embarked on a major programme of building and refurbishment; although his most importance initiative was undoubtedly the introduction of computers. Prescient enough to realise the part they were destined to play in the future, he brought them into the School as early as 1978. 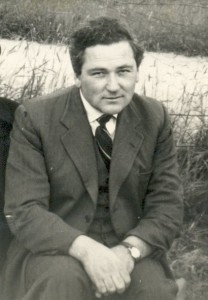 Douglas Anderson retired in 1989. Between him and his father the School had been in Anderson hands for some sixty-two years. His successor was Ivan Bolton, a native of Dublin, who, however, had connections to Ulster through his mother, a native of Monaghan. He arrived at the Royal at the start of the seventies a young and enthusiastic teacher of English and Geography, the quality of whose lessons are still remembered today. In 1976 he married local girl Hilda Storey, herself a past pupil of the School, later destined to become Vice-Principal.

Ivan Bolton may certainly be said to have built on the firm foundations laid in the Anderson years. During his headmastership an extensive amount of construction has been undertaken, totally over £700,000. He has also continued the Anderson policy of inclusivity. On the one hand the School welcomes several differently -abled students; on the other there are a number of non-national pupils, mainly from Spain, but also from Austria, Germany, the Russian Federation, and Kashmir.

The School is certainly still small in terms of numbers; and no doubt it lacks the resources of some of its larger neighbours. Yet despite this it continues to enjoy achievement and success in a wide number of fields, be it academically in terms of examination results, or in other areas, such as the Coca-Cola ‘Form and Fusion’ competition or Young Enterprise. One can thus conclude this survey of the past by looking forward with confidence to the future, as our long and proud tradition is carried on into a new century.

The five Royal Schools were founded by King James I in 1608. They therefore celebrated the